At atmospheric temperature and pressures, anhydrous ammonia is a pungent colorless gas. Anhydrous ammonia boils at -28°F and freezes to a white crystalline mass at -108°F. When heated above its critical temperature of 270.3°F, ammonia exists only as a vapor regardless of the pressure. Between the melting and critical points, liquid ammonia exerts a vapor pressure, which increases with rising temperature. When liquid ammonia is in a closed container, it is in equilibrium with ammonia vapor and the pressure within the container bears a definite relationship to the temperature.

Because of its great affinity for water, care must be taken in the storage and handling of ammonia to keep it dry. "Anhydrous" means "without water." When ammonia gas is dissolved in water, the resulting material is ammonium hydroxide, or "aqua" ammonia. The two materials should not be confused. 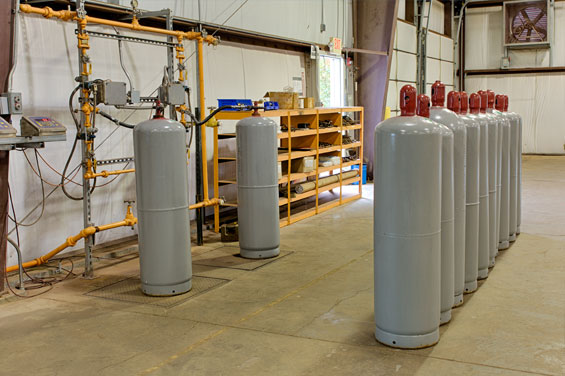 The common metals are not affected by dry ammonia. Moist ammonia will not corrode iron or steel, but will react rapidly with copper, brass, zinc and many alloys, especially those containing copper. Only steel or ductile iron should be used for ammonia containers, valves, fittings and piping.

Under normal conditions, ammonia is a very stable compound. It takes excessive temperatures (about 840° to 930°F) to cause it to dissociate slightly at atmospheric pressure. When this happens, the dissociated products are nitrogen and hydrogen. Ammonia gas burns in a mixture with air within a limited range. The flammable limits at atmospheric pressure are 15% to 28% by volume of ammonia in air. Experiments conducted by Underwriters Laboratories indicate that an ammonia-air mixture in a standard quartz bomb will not ignite at temperatures below 1562°F. When an iron bomb, having a catalytic effect, was used, the ignition temperature dropped to 1204°F.

The following sources of information on anhydrous ammonia are recommended.

Storage and Handling of Anhydrous Ammonia